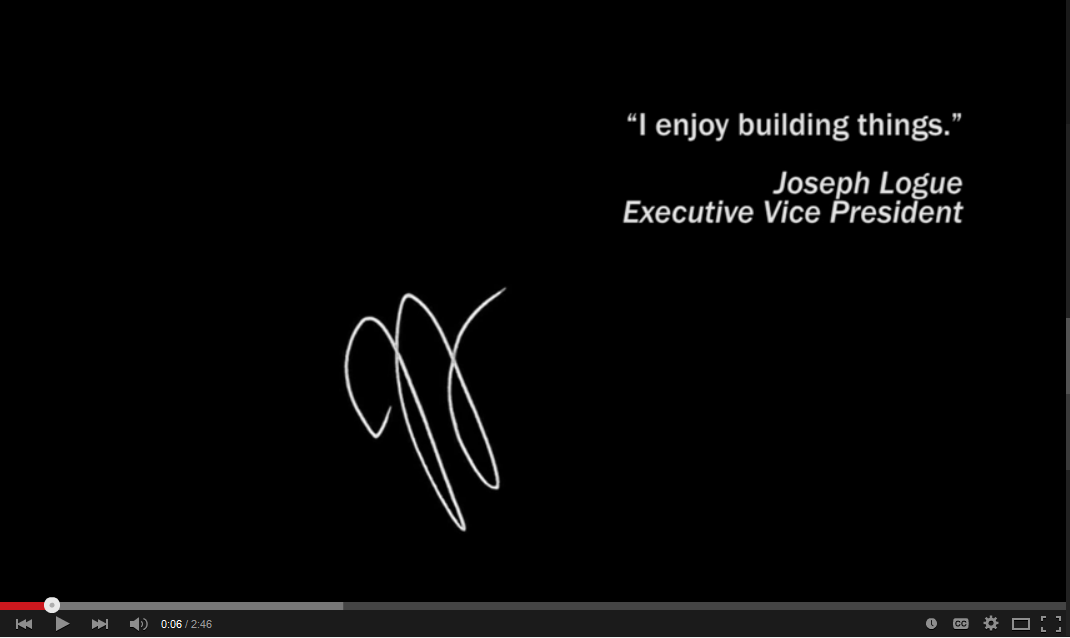 Joe Logue talks about how he learned early on that if he applied heart and thought, he could build anything. At Booz Allen, that life lesson led to his building many businesses and putting clients' interests first.

Remodeling a kitchen, running a business, and creating global IT services may be as different as can be.  But Logue clearly had the same underlying knowledge, skills and motivation that made him successful across these endeavors.  I also love hearing how a diehard independent (i.e. entrepreneur) found himself working for a large corporation and how a wise senior partner tapped his ego and gave him every opportunity to remain an entrepreneur (i.e. intrapreneur). 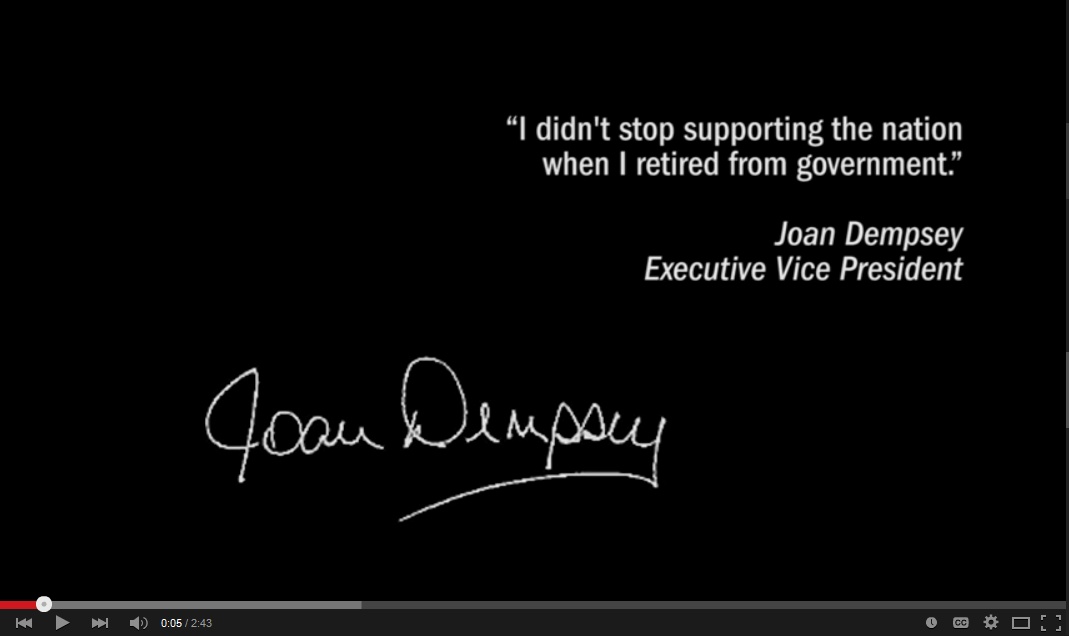 Reflecting on her career in various government positions and at Booz Allen, Joan Dempsey shares the importance, excitement, and rewards of supporting the nation and the nation's security.

What an intriguing personal story Dempsey relates:  To be an adventurous young woman in the 1970s Navy, working as a cryptologic technician and listening to Soviet military communications, must have been a job of a lifetime.  Booz gave her an opportunity to further that experience and work with Homeland Security in the post-9/11 landscape.  She saw it as an amazing gift to be involved in such programs.
Posted by Unknown at 6:00 AM No comments: 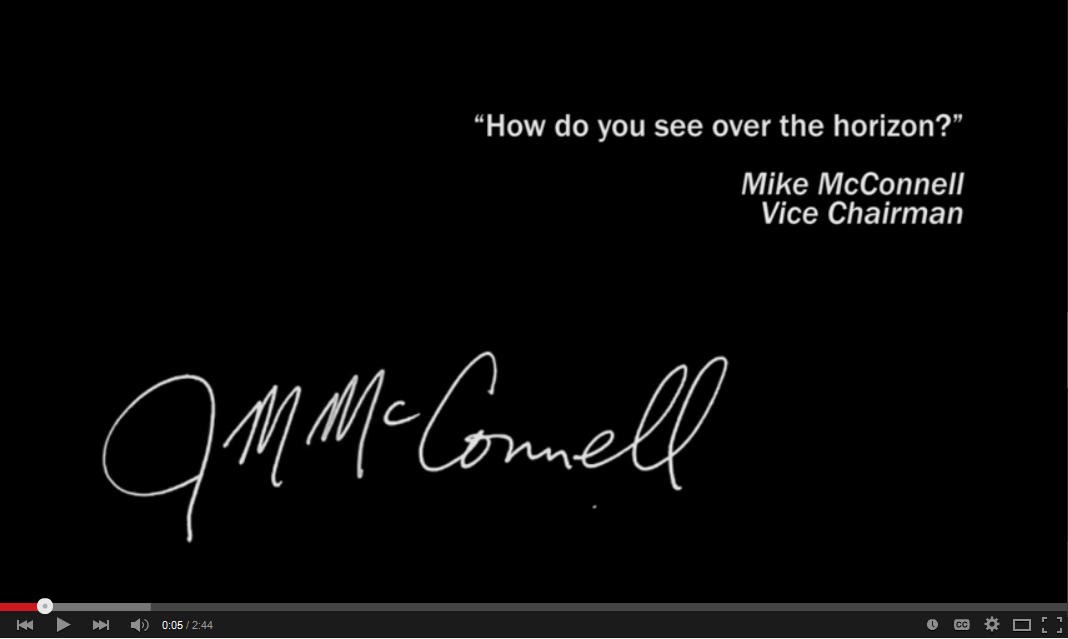 When he was around 10 years old, Mike McConnell made a commitment to never be afraid of change. Here he shares how that outlook translated into anticipating threats as an intelligence officer and embracing technology.

Some of us go on the notion that the status quo is a ballast, an anchor, a mooring; while others seem innately keen to rock the boat, stir the pot, or rouse the sleeping dog.  In Myers-Briggs language, the former may be more Sensing (facts) and Judging (planning) as opposed to the latter who may be more Intuitive (possibilities) and Perceiving (spontaneous).  Clearly McConnell fits the latter profile.  Because there seems to be a mass of people camped in the former, he has had to pound the pavement - that is, with articles and talks - on getting companies to recognize, appreciate and understand that digital technology was afoot and cyber threats along with it.  Not everyone has change in his or her DNA, in the way it was for McConnell, so the challenge is to reprogram that DNA, as McConnell has to had to do with clients, so the CEO himself or herself can see over the horizon.

The Hunger Games: Mockingjay - Part 1 is one of the most anticipated blockbusters of the year, but will it break records? FORBES breaks down the numbers from the biggest movies of 2014 and offers some lofty predictions.

I love films for their artistic value, personal impact, and business results, and the third film in the Hunger Games series is poised to go through the roof.  Mockingjay Part 1 premiered in London on November 19th and in North America on November 21st, and as of November 24th it raked in $276+ million at the box office.  Just staggering.  Star Jennifer Lawrence packs a killer combination of talent and beauty, and just as Kristen Stewart dominated Hollywood earnings from her Twilight gigs, she is poised to do so for this year.  So add wealth to that killer combination.

Apple in Own Market Stratosphere

Apple has doubled in value, since August 2011 when Tim Cook took over the top role.  For me, the crucial factor is what Cantor Fitzgerald analyst Brian White said at the outset of this Bloomberg interview: That Cook is more innovative than the market gives him credit for.  I was one of those who didn't think he was that innovative, and frankly I am still not convinced he is all that innovative.  However, I am coming to appreciate what is evidently his top leadership prowess.  Apple is producing stellar results since Steve Jobs died in October 2011.  With the iPhone leading sales, iPad growing in sales (despite an apparently declining tablet market), and AppleWatch poised to tap huge market potential, those stellar results may continue for a long while yet.

A string of scandals and uncertainty over Britain’s membership in the European Union have led to New York replacing London as the world’s most important financial center.

As Forbes contributor Jesse Colombo explains in This New Libor 'Scandal' Will Cause A Terrifying Financial Crisis, Barclays, UBS, Rabobank, and the Royal Bank of Scotland, among others, conspired to manipulate the London Interbank Offered Rate (Libor), which banks around the world drew on to determine the interest rates they charged.  It is simply mind boggling (a) to think that this manipulation had gone on since 1991 and (b) to estimate the hundreds of billions of dollars their manipulation added to their coffers.  As for the issues surrounding Britain vis-a-vis the European Union, here is what UK Independence Party leader Nigel Farage wittily said: I don't just want Britain to leave the EU; I want Europe to leave the EU.  So the rise of New York as the number one favored financial hub, by scores of finance professionals, may be more of a London backlash than anything.